Close
Menu
Your Shopping Bag
You have no items in your shopping cart.
Menu
Simply Grilled Kippers 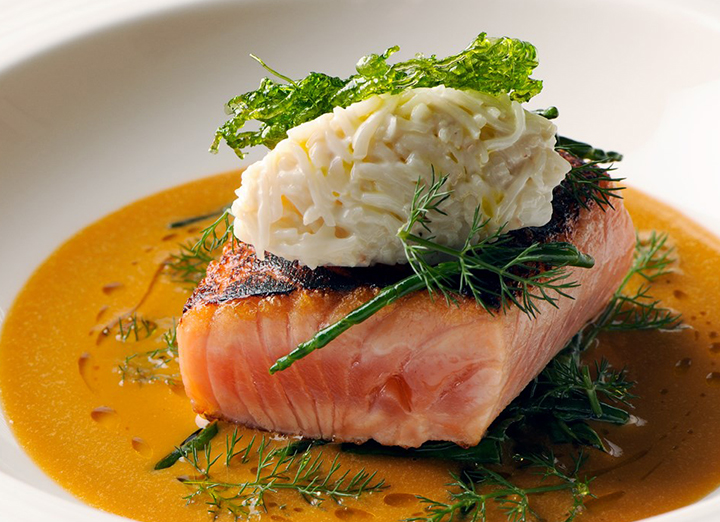 InstructionsTo make the crab stock, peel and dice the onion and carrots. Thinly slice the fennel, reserving the fronds. Peel and crush the garlic cloves.Heat the butter in a pot until foaming. Add the whole crabs (or shells), onion, carrots, fennel, garlic and tomatoes and fry for 4-5 minutes, or until the vegetables have softened.Pour in the cider and 2 litres of water, then bring the mixture to a simmer and cook for 1 hour.Strain the stock through a sieve set over a saucepan and discard the solids.Bring the stock to the boil and boil hard for 10 minutes, or until the volume of liquid has reduced by half. Remove the pan from the heat, set aside to cool, then chill.For the cider-cured sea trout recipe begin by filleting and skinning the fish - be sure to remove the pin bones from each side.Cut the sea trout fillets in half to give four portions and place on a tray. Mix the salt and sugar together and sprinkle over the sea tout. Drizzle with cider and chill for 1 hour.Wash the cure off the sea trout, pat dry with kitchen paper, then wrap in cling film and return to the fridge to chill.To make the brown crab mayonnaise, cook the crab in a saucepan of boiling salted water for 18-20 minutes. Remove the crab from the pan and set aside to cool.Remove the crabâs legs by twisting them off where they meet the body, then pull away the claws. Lay the crab on its back, shell-side down, put your hands under the edge of the crab and push upwards until you hear it break (you may need to use a heavy knife to help you lever the crab apart).Remove all ten of the spongy âdead menâs fingersâ and discard. Drain any excess water from the shell and remove the stomach sac and hard membranes inside the shell.Use a spoon to remove the brown meat from the shell (and any soft shell that has formed). Put it in a bowl and mash with a fork then place in the fridge.Break each crab claw in half. Use a crab pick or the handle of a teaspoon to scrape the white meat out of the thick end of the claw and put it in a bowl.Use the back of a heavy-bladed knife to crack open the remaining piece of claw and the pincers. Remove all the white meat and flake into the bowl. Remove the piece of cartilage inside each of the claws, pick off the meat and discard the cartilage.Take a sharp knife and cut the crab body in half then in half again. Pick out the meat using your fingers. Pick through the white crabmeat to check for small pieces of shell and discard any you find, then set the white crabmeat aside.Measure out 100g of the brown crabmeat (any extra can be used for another recipe) and place in a bowl with the egg yolk, vinegar and mustard.Whisk together until combined then very slowly whisk in the oil to make a mayonnaise. Season to taste with salt.Take the white crabmeat and add 1 tablespoon of the brown crab mayonnaise to it. Chop the reserved fennel fronds and stir them into the white crabmeat along with the lemon juice. Set aside.To make the sauce, measure out 100g of the brown crab mayonnaise and place in a bowl with the double cream. Add just enough of the crab stock to give a sauce consistency then place in the fridge.Blanch the samphire in a pan of boiling salted water for 1 minute, then drain. Melt the butter in a frying pan and cook the sea beet for 1-2 minutes, or until wilted, then drain.Heat some vegetable oil to 200C in a deep-fat fryer. Meanwhile, pat the gutweed dry with kitchen paper. Fry it for 20 seconds then set aside to drain on kitchen paper.To cook the sea trout, heat the oil in a frying pan. Lay the fillets presentation-side down in the pan and cook for 4-5 minutes or until golden brown. Carefully turn the fillets over and cook for a further 30 seconds only.Warm the sauce through in a saucepan without letting it boil. Place some wilted sea beet at the centre of each serving bowl and spoon over some of the white crab mixture. Add some samphire, then the sea trout. Drizzle with sauce and sprinkle with the deep-fried seaweed to finish.